"Sambop by Paulo Morello's Brazilian Quartet is the absolute real deal! It's burning and swinging from the very first note with some beautiful soulful ballads, too - to break up the 'burn' ... you'll love this! I've toured with Paulo a lot the past few years with the B3 Organ trio 'Hammond Eggs' which is more in Bebop/Funk mode, so this is yet another side of Paulo's music … he sure has a lot of bases covered … didn’t realize he has a Brazilian heart!“
-- Randy Brecker

"A guy with an L5 in love with jazz and Brazilian music." That was Paulo Morello's self-characterization for a journalist some years ago.

Equally concise and straight forward is the title of his latest album. Sambop is a fusion of two terms - the latter associating the core style of modern jazz, while the first alludes to the most important form and the most influential rhythm of Brazilian music - standing for the musical and artistic concept of the present album: the encounter of Samba and Bop, or rather: Morello and his three musical peers merging Bop jazz and the diversity of rhythms, forms, and voices of Brazilian music into a whole, into something new and beautiful, as if Samba and Choro had always been played on the semiacoustic jazz guitar; or as if Duke Ellington had first designed his "I'm Just a Lucky So and So" as a funky Baião".

If they choose a jazz standard it becomes "brazilianized", and if they decide in favor of a Choro like "Nosso Amigo Esmé" Morello's soloing comes out to be just as jazzy and bop-style, as if Brazilian Choros have always been a part of the jazz repertoires and influences of role models like Wes Montgomery, George Benson, and Pat Martino.

Morello and his fellow musicians do this considering all those qualities that make Jazz and Brazilian music distinctive and strong: with the springy effortlessness of Brazilian music. With the refinement, intensity, and speed of jazz. And with a naturally virtuoso, joyous, and fluid easiness achievable only by true masters on their instrument.

For Sambop Paulo Morello has put together a choice band. Lula Galvão (b. 1962), the guest star from Brazil on acoustic guitar, counts among the masters of his trade having played for Caetano Veloso, Rosa Passos, Ivan Lins, and Guinga. On the present album he is not just backing, but an equal partner for Morello, as can be definitely heard in duet pieces such as Jacob do Bandolim's "Migalhas De Amor" or Cole Porters "You'd Be So Nice to Come Home to" and in ballads (e. g. "Indeciso"), songs full of Saudade, the specific Brazilian form of languorously melancholic yearning, which very likely might only be captured and expressed in music. Especially delightful: the lovely transparent, never ambiguous rapport of the nylon-string and semi acoustic guitars.

The rhythmic drive is taken care of by Eduardo "Dudu" Penz on electric bass and Mauro Martins on drums, two Brazilians living in Switzerland and for Paulo Morello "the best Brazilian rhythm group in all of Europe", with whom he has been playing frequently for 15 years. Dudu Penz enriches his bass solo runs with scat singing; Mauro Martins either sounds like a complete samba group (as in his "Sambop"-intro) or as delicate as if he were just playing the Pandeiro, the Brazilian tambourine.

As to Paulo Morello (b. 1970), he has played Brazilian music almost as long as he has played jazz, and he does that so well, so skillfully, and authentic like probably no second jazz guitarist in Europe. His passion for this music awoke 23 years ago while he was in New York as a student at the renowned New School. When he heard the regularly playing Trio da Paz with Romero Lubambo (guitar), Nilson Matta (bass) and Duduka da Fonseca (drums) he was irreversibly hooked - his interests, his studiousness, his passion were focussed on Brazilian music. In 2000 he spent several months in Rio de Janeiro and made new contacts which during the following years led to tours and recordings with, among others, the Bossa Nova legends Johnny Alf, Alaide Costa, Leny Andrade and the drummer Erivelton Silva, a colleague of Lula Galvão with Rosa Passos.

The present album was recorded in August 2017 at the noted Hansahaus Studio in Bonn. And what one would never expect while listening: The two guitarists have met for the first time only three days prior to the studio date actually, thanks to a mutual friend, the Cologne singer Ulla Haesen, who brought the two together. She knew that there would be music in that encounter. Great music, which never makes you know if what you hear is samba or jazzy Bop. It is both at the same time - it is Sambop! And that is, much likely, the best you can compliment this wonderful album for. 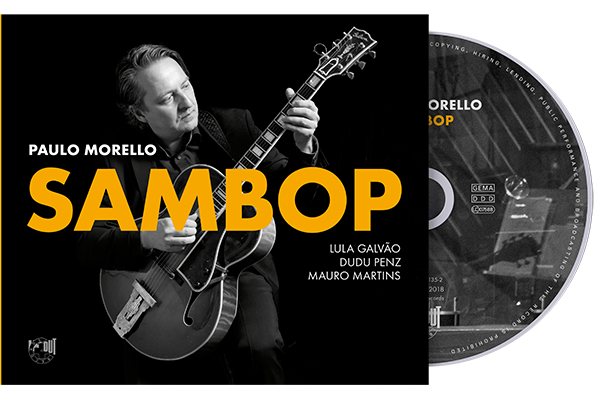 Listen to SAMBOP on Spotify

"Paulo Morello's Sambop has such a rich personality that is reflected in every note. You guys have really brought out a sense of the people of Brazil through the notes!"
-- Billy Cobham